From Nobuyoshi Araki to Jo Ann Callis, These Photographers Captured the Desire and Dynamics of Fetish

Jacqui PalumboOct 22, 2019 1:22pmKat Toronto (Miss Meatface)Miss Meatface as Mae West, 2017The Untitled Space$600 – 1,500Since the invention of the daguerreotype in 1839, photographers have probed the erotic and the explicit. Fetishes are often acted out behind closed doors, but photography can reveal the power structures, intimacy, compulsion, and raw sexuality of these acts. Photography gave us the means to question how we navigate our base desires within societal structures. Robert Mapplethorpe’s work epitomized this debate the year after he died, with his most visceral and sexual images thrust into the bright lights of a courtroom. Is it the photographer or the subject’s desire being shown? These five photographers exploring fetish have each contributed their gaze to criticism and acclaim.

Jo Ann CallisUntitled, From Early Color Portfolio,, ca. 1976ROSEGALLERYContact for priceJo Ann CallisWoman with Blond Hair, 1977ROSEGALLERYContact for priceIn a body of work from the 1970s, Jo Ann Callis crops in close on the elements that make up desire. A man grips a woman’s ankles as she stands on a chair in heels, illuminated by the camera’s flash. A woman’s hand with dirtied cuticles lies in a pool of honey. A single marker line runs down the spine of a woman, who is face down in bed. Callis uses everyday items in suggestive ways: Duct tape stretches across nipples, or black silky gloves against bare skin.The photographer kept her figures anonymous in what she refers to as her “fetish project.” It heightens the sense of mystery in interactions that could be strangely innocuous or the makings of an illicit album. She made the series as a mother in Los Angeles, having just obtained her undergraduate degree after an extended hiatus from school. Though she wasn’t politically engaged with the feminism movement of the decade, she, like many of her contemporaries, reclaimed sexuality through the female gaze. 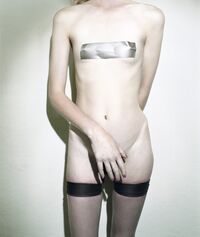 Jo Ann CallisView Slideshow2 ImagesThough Callis explores the interior lives of the women in her scenes—both in their minds and in their homes—she told TheNew Yorker in 2014 that she rejects the word “domesticity” to describe her work. The home “is a place of comfort and discomfort,” she said. “There is a parallel between the two in most everything.” 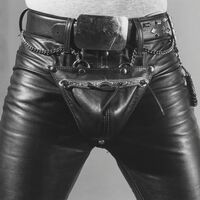 Robert MapplethorpeView Slideshow3 ImagesAt the time of his death, Mapplethorpe was already well-known for his black-and-white portraits of famous faces, bodies, and flowers, but the controversy spotlighted his explicit images of queer subcultures, as well. The court case asked: Was it art? Mapplethorpe once said he didn’t think there was “that much difference between a photograph of a fist up someone’s ass and a photograph of carnations in a bowl.” Curators who testified echoed this sentiment. Janet Kardon, who worked on the show with Mapplethorpe before his death, said the photographer was “very attentive to lighting, arrangement within a picture, texture of skin, the same criteria he would use when he would do a flower.”

Nobuyoshi ArakiKinbaku – Bondage Series, 1997Kunzt GalleryNobuyoshi ArakiBondage Series #2, 1997Kunzt GalleryNobuyoshi Araki’s prolific archive of images occupies a private world of sex that seems to exist in a vaccum. Tight frames in bedrooms, bathrooms, and—rarely—outdoors show nude Japanese women who are vulnerable yet guarded, bound by the gaze of his camera and often by ropes. They are certainly there for pleasure, but whose?Born in Tokyo in 1940, Araki grew up during America’s post-war occupation, as Western culture commingled with Japanese tradition while communist-anarchist student movements blossomed and burned. Araki’s contemporaries Daido Moriyama and Shomei Tomatsu roamed the streets of Tokyo’s dark beating heart, Shinjuku, seeking those who sought refuge in drink, dancing, or sex. 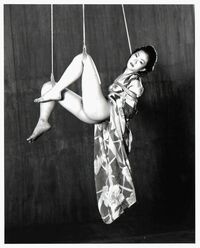 Nobuyoshi ArakiView Slideshow3 ImagesAraki, too, captured the spaces where taboo reigned—his series “Tokyo Lucky Hole” (1978–85) captured Shinjuku’s sex clubs until they were shuttered under new legislation. Araki is also known for his images of rope play, or kinbaku. In black-and-white and color film images, as well as Polaroids, women in kimonos (or nothing at all) are suspended in the air or splayed on the floor, their limbs tied together.The photographer still enjoys notoriety and renown at age 79, but his most famous model and collaborator, Kaori, spoke out against him during the #MeToo movement in 2018. She accused him of exploiting her without a fair contract or pay, and of treating her like an object, raising questions about the realities of being an artist’s muse.

Helmut NewtonSaddle I, 1976ArtLife GalleryIn 1976, Helmut Newton had to decide which Hermès whips and saddles would look best in his shoot. Newton once called the equestrian-minded luxury brand “the world’s greatest sex shop.” The photographer earned the nickname “King of Kink” for good reason: At this shoot in the Hotel Lancaster, he created the image Saddle I, of a model on all fours on the bed wearing the titular accessory. It became iconic in fashion and inflammatory in feminist circles.Born in Berlin in 1920 to a Jewish family, Newton fled Nazi Germany and eventually joined Australian armed forces to earn his citizenship after a stint as a gigolo in Singapore. He became known for his erotic high-contrast fashion images in Vogue, Playboy, and Harper’s Bazaar capturing the famous faces and lithe bodies of the era. His first book in 1976, White Women, featured a selection of editorial images enclosed in a cover of a bare bum with a black garter. 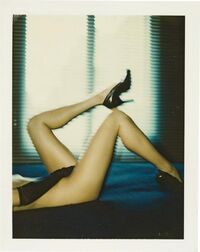 Helmut NewtonView Slideshow3 ImagesNewton’s fetishization was considered sumptuous, never seedy. “His menu—threesomes, sado-masochism, sapphism, prostitution, voyeurism, maids, mistresses, masters and beyond—may be the routine fare of pornography, but in his hands the potentially crude acquires an inimitable gloss of luxurious sophistication,” Sarah Mower wrote for the New York Times in 2003, the year before his death. Eighty of Newton’s celebrity subjects signed the first copy of the enormous Taschen tome published in 1999 titled SUMO. It became the most expensive book to be published in the 20th century, hauling in $430,000 at auction. This year, Taschen has released a new edition of SUMO for the 20th anniversary. 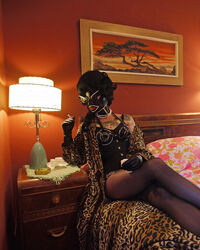 Kat Toronto (Miss Meatface)View Slideshow3 ImagesT oronto developed Miss Meatface during an exceptionally hard time in her life, following cervical cancer, a hysterectomy, and a painful divorce. What began as a series of therapeutic self-portraits evolved into a full character that she could step into and explore. After sorting through her grandmother’s mid-century photos and ephemera and looking back to classic manners books, she was intrigued by the idealization of womanhood and how it can be restrictive. Toronto even published an updated etiquette book in 2017 to guide other like-minded ladies.Inspired by an old etiquette book, she told Dazed,“My absolute favorite quote has to be: ‘Delicate flowers must know how to crack a fierce whip. That’s important, especially as women. You may look like the loveliest little flower, but down below, you have to be a hellion.”